Project: Establishing a smithery with a shop for blacksmith supplies

Felix Fred is an ornamental blacksmith from Nigeria who came to Germany in 2015 due to his unpromising career prospects in his home country. In Germany, he wanted to earn enough money to be able to work self-employed in Nigeria. He immediately found a job as welder and was highly respected by his employer. Nevertheless, he was stripped of his work permit after only a short period of time. Subsequently, he was only on welfare and still had to support his family in Nigeria. This is why he lacked the opportunity to earn his start-up funds for his independence in Nigeria on his own.

When his asylum application was rejected, together with Vision Yamalé, Felix developed a project plan to set up a business in his home country. He received support for preparations and fundraising from us. In October 2019, Felix eventually returned to Benin City.

When we received the bad news that two Nigerians, who had already decided to return voluntarily, had been deported in a very uncivil manner, we know that we had to step up. One of the Nigerians, Stanley, is a welder like Felix. Felix immediately agreed to make contact and offer his help. He invited Stanley to his house and is going to work together with him for a while and give advice on how to establish their own business in Abuja. Thank you, Felix! You have saved the situation. 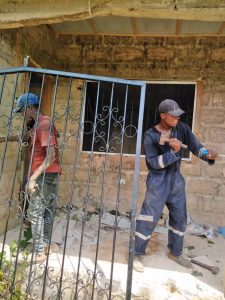 After some initial difficulties due to the COVID-19 pandemic, Felix received his first orders as a blacksmith. He had to finance the materials for his elaborately ornamented portals in advance.