Demba trained as an electrician in Prien. In September 2021, he will return to his hometown Diamniadio in Senegal. He has the dream of establishing his own electric shop where he could sell electrical and mechanical appliances while also accepting orders for electrical installations (mostly inhouse electronics) and training co-workers. Demba has already developed a business plan for his project.

Demba has a vision for Senegal. In his business, he wants to implement modern safety standards he has got to know in Germany. In this way, he could contribute to the prevention of the frequent electrical accidents in Senegal. By training other employees, Demba wants to pass on his knowledge acquired in Germany.

Demba’s dream of setting up his own electric shop in Senegal not only creates training vacancies and workplaces, it also contributes to the improvement of safety standards in his home country.

Demba trained as an electrician in Prien. In September 2021, he will return to his hometown Diamniadio in Senegal.

Demba is preparing his return

In his hometown, Demba has started to build a house where he will live with his family when he returns and which will also house his workshop. Fortunately, he already bought the land a few years ago at a favourable price.

Now there is a shell there. Coordinating the work from afar is time-consuming, but it works well. As soon as Demba is on site, he will lend a hand himself and take care of the electrics; it is to be a sample installation that he can show to future clients.

The house is crucial, of course, so that Demba can get started as an electrician in September. At the moment, he desperately needs every euro for the completion.

Information booth at the market 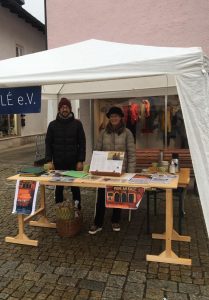 On October 16th, 2020, we held our fist information booth despite the cold and rainy weather. On Friday morning, we set up a tent in the market place of Prien. Since Friday is also the day of the weekly market, quite a few people were out and about. We had hung up posters, post cards and other information material about Vision Yamalé. Most importantly to us, we wanted to use this opportunity to promote Demba’s presentation next Tuesday. For this occasion, we had printed out 30 invitations. We were able to give out all of them. This said, in our opinion the initiative has been a thorough success.

On the eve of October 20th, 2020, we held our presentation called “Return to West Africa – innovation blazes the trail” in the community centre of the Prien Protestant Church. Due to the existing COVID-19 regulations, we had arranged the chairs in the required distance from each other and had put name cards on them. Furthermore, mandatory mask wearing and a limited attendance had to be observed. Despite all this, people were not dissuaded by the regulations, we even had a full house.

Demba presented his project together with Dr. Lucinde Braun (board member). Demba talked about his daily work and training at Elektro Langl and explained the reasons for his anticipated return to Sengal: He wants to establish his own electro shop there and train co-workers. Besides, he wants to be reunited with his family who live there and also do something against the frequent electrical accidents in Senegal that occur frequently due to the lack of know-how.

This was followed by a quick break. We had arranged lists with tools Demba needs for his return. The guests used this occasion and wrote in their names to donate for a tool of their choice.

After the break, Arne Burchard explained the legal situation for migrants and offered an insight into the practices of deportation deployed by the foreigners’ registration offices. These might seem random at times to the outsider and are subject of controversial public discussion. The topic was also of great interest to the audience.

Helke Fussell presented Vision Yamalé e. V. She talked about the concept of the association: Working together with Africans at eye level. She presented the history of the association, starting with the first team for Babakar Segnane in 2017, followed by the founding of the association in 2019. Then, she introduced the individual projects, focusing mostly on that of Babakar Segnane. With the help of Vison Yamalé, he was able to return to Senegal, where he now operates a farm, a restaurant and a catering firm. Furthermore, the successful projects of Felix Fred and Efe Osas were mentioned. As a final note, Helke called upon the audience to get involved with the association. She promoted the “Prien model“ that could be extended to other towns.

Overall, it has been a successful evening that hopefully helped to increase the interest in our return projects and Vision Yamalé.