In May 2015, Babakar Seder Segnane came to Prien in hope of finding better work opportunities. He had weathered a dangerous journey. However, his dream to work in Germany to support his family in Senegal proved to be unfulfillable. He had risked his life because he could not see a prospect in his home country, but now, he could not profit from his skills in Germany either. Nevertheless, he soon engaged in several activities in Germany and became well-known in the town of Prien over only a short period of time.

Then, out of the blue, his asylum application was rejected. Now, he faced two choices: he could either descend into illegality in Germany or return to his home country. With the support of the citizens of Prien he was able to develop a business plan and receive start-up funding. Babakar gained new hope and prospects and eventually decided to return to Senegal.

With the support from his return project, he could create new livelihoods for him and his village community. He managed to establish a farm, restaurant and even an event room with catering and thereby showed that the flight to Europe may not be a long-term solution for everyone. 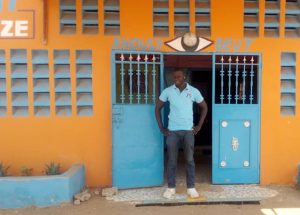 In November 2017, everything was ready at last. Babakar returned to his native village Musa. Musa lies in Central Senegal in the region of Kaffrine and was founded by Babakar’s grandfather at the beginning of the 20th century. Thanks to his father, the once small agricultural enterprise became a sustaining basis of existence for both his family and his village community. After his father died, the enterprise was dissolved and the land was distributed among his children. Babakar inherited 10 hectares of land.

During rainy season, peanuts, sweet corn, millet or manioc can be grown on the land, which Babakar – due to our funds – was able to do even before his return, in the summer of 2017. His brother took care of the peanut sowing, but for the rest of the year, the land lay fallow due to the lack of watering and the villagers were unemployed. In order to make the agriculture around Musa village profitable again and to be able to grow vegetables the whole year round, start-up funding was needed.

With the support of the Central Office for Returnees as well as private donations, the project started. We decided in our team that Babakar should develop the project according to his own ideas.

His dream was to have chicken farming besides the growing of vegetables, which would lead to faster economic gains. This project also was financed by private donations, with the result that Babakar was able to start with both the chicken farming and the vegetable growing in November 2017.

In March 2018, Babakar also managed to build a restaurant on the main road of Kaffrine, the largest city in the region. He called it “Prine am Kinze”, his way of spelling Prien am Chiemsee, in memory of his second home Prien and his friends and supporters from there.

At the end of 2018, another dream of his was realised. An event room with catering called “Prime am Kinze Prestige“. The room accommodates up to 60 guests and is used to host various events. Apart from birthday parties, weddings, business events and celebrations of the great Muslim holidays, the society meetings of „Mouvement des entreprises de la region de Kaffrine“ are also held there as well as events for and with remigrated Senegalese.

It is our goal to accompany Babakar’s project over a long period of time and to establish an exchange on multiple levels between Prien in Upper Bavaria and the region of Kaffrine in Central Senegal.

So far, Babakar has shown his impeccable instinct for opportunities and market situations and he has already created more than 12 workplaces. Furthermore, he employs 8 to 10 workers by now and pays their salaries out of his sales. He has constantly new ideas. We consider them together and if they look promising, we organise funding.

In this way, his dream to make his native village profitable again is slowly but steadily coming true. He is visited regularly by our team from Germany. And we are in awe of his fast developments.